The Variety Boys and Girls Club of Queens unveiled a state-of-the-art computer and technology lab Thursday in Long Island City. Funded by a $50,000 grant from Time Warner Cable, the lab has new computers, software programs, tablets, smart boards and more. 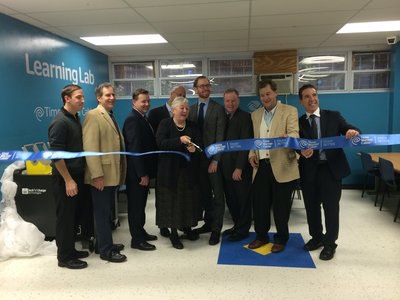 Executive Director Matthew Troy said all of the club’s students, nearly 200 a day, will at some point use the equipment.  “This really fits into my vision, just really upping the game for our program quality here,” Troy said. “We want our STEM (science, technology, engineering and math) programs to be amongst our most recognizable programs that we offer.”  In addition to boosting the quality of its afterschool programs, VBGCQ will be starting its own robotics team, thanks to the Time Warner Cable grant.

Troy thanked the community partners involved in putting together the lab, including TWC and several universities in the area. “This is their way of giving back to the community,” Troy said. “They’ve recognized Variety Boys and Girls Club of Queens as an able partner in the community, a hub for kids from schools throughout the area.”

One of the community partners is LDI, a digital solutions and technology company. Brian Gertler, its senior vice president, was excited to bring new technologies to the club.  “The most significant thing Variety and Time Warner Cable has done is never lose sight of the children,” Gertler said. “It’s not only the minds, but the hearts we’re touching. We hope to see these kids grow with their amazing talents and possibilities.” Gertler gave a tour of the lab and explained some of the technology behind it. He said he insisted on bringing the arts to the center, which now has new cameras and software programs for students to create and edit photography. He hopes to grow the program and the opportunities for students at the club.

Kitty Prager, a board member of VBGCQ, said a 14-member committee put together the plan to build the center. She had strong praise for the community partners.  “Your tremendous generosity will help the wellbeing of not only the kids, but the Astoria community,” Prager said. She added that the lab will allow the kids to have the preparation they need, but don’t always have access to.

Lina Klebanov, a community investment manager at Time Warner Cable, said this is the 19th learning lab opened since 2011. Time Warner Cable’s goal is to open 40 labs by 2020. She said Time Warner Cable decided on this particular site because they already had an existing relationship with VBGCQ. After she came for a site visit, the conversation for building a lab began. “I saw the lab that they had, and I thought that their equipment was old,” Klebanov said. “And they serve so many kids they could benefit from a Time Warner Cable learning lab.”  She said the program’s main criterion is need. They look for diverse populations in dispersed locations that need the new technology to maximize the impact of the labs. The program also looks for physical spaces that can house the computer centers.

Because Time Warner Cable is a  cable company reliant on technology, Klebanov said investing in  the future of  the workforce is vital to the company.  “We want to invest in STEM education so our kids, who are our future, can come and work for Time Warner Cable and continue to make our programs and our company the amazing company that it is,” she said.

Other nonprofit organizations that also have a Time Warner Cable learning lab include Korean Community Services in Flushing and the Easter Seals in Manhattan, which serves seniors and veterans, according to Klebanov. She said the next lab opening will be with the Chinese-American Planning Council in Flushing.

“We pride ourselves through this program on donating to a very diverse group of organizations,” Klebanov said. “They’re all very different, but they have one common goal of serving people in need.”